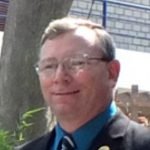 Joe is a former Deputy Sheriff, who worked with the Lee County Sheriff’s Office just prior to answering the call to missions. He is also a 6 year veteran of the United States Navy and served with VS-24 aboard the U.S.S. Nimitz.

In 1983 while stationed in Millington, Tennessee, Joe received Christ as his personal Saviour at the First Baptist Church of Millington. From there he was transferred to Jacksonville, Florida where he became a member of Trinity Baptist Church. Joe became involved with the Deaf Ministry at Trinity in 1985. It was there where he met his wife Lisa. They were married on May 20, 1988. In November of 1988 Joe completed his enlistment in the Navy and moved to Belleville, IL and went on staff as Asst. Pastor to the Deaf at Faith Baptist Church under Pastor Scott Baker. After a year of training and experience at Faith, Joe and family moved back to Jacksonville for further training in the Deaf Ministry. While there he attended classes related to the Deaf Ministry at Trinity Baptist College.

In 1991 Joe graduated Valedictorian form the Jacksonville Sheriff’s Office/FCCJ Police academy and in February of 1992 he was hired with the Lee County Sheriff’s office in Ft. Myers, FL as a Deputy. In Ft. Myers, Joe & family became active members of Emmanuel Baptist Church. It was there in April of 1994 in a mission’s conference that Joe surrendered to the call to preach. Pastor Richard Riley brought him on as Asst. Pastor where he worked for over two years. From there Joe took a position as assistant pastor at Labelle Baptist Temple in Labelle, Florida. It was there that Joe & Lisa went on a vacation to visit deaf missionaries Vernon and Velma Miller in Lima, Peru. It was during that vacation that God called Joe to become a missionary to the Deaf in Peru, South America. In November of 1998, Joe resigned as assistant Pastor, resigned his position with the Sheriff’s Office, and went on full time deputation.

On December 2, 1999, the Kotvas family moved to Peru, South America where they are serving today.