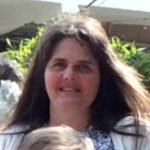 Lisa was born in Australia as her father was in the U.S. Air Force at the time. After moving around quite a bit her father retired and the family settled in Belleville, IL.

At age 16 Lisa trusted Christ as her Saviour at the Faith Baptist Church in Belleville. and at 17 went off to Trinity Baptist College. It was there that she developed a burden for deaf people and became involved in the deaf ministry at Trinity in 1985.

In the Summer of 1987, she took a short term mission trip to Lima Peru to work with Vernon and Velma Miller at Efata. Lisa graduated in May of 1988 and two days later we were married. She is a homemaker and my partner in ministry at Efata.